Laura Velvet and the Bookhouse Boys

Laura Velvet and the Bookhouse Boys feature a unique blend of fresh, young vocal talent and versatile, experienced musicians. Through performances that are as much time travel as music events, Laura Velvet wows audiences with sultry tunes from torch singers of the 1960s as well as danceable hits of quintessential Motown girl groups.

Lisa Holman, a recent Music and French graduate from the University of Minnesota, plays the part of 1960's Torch Singer Laura Velvet with sizzle and style. From opera and collaborative concerts to studying abroad at the celebrated French Music Conservatory La Schola Cantorum, Lisa's college experience prepared her well for center stage. Starring at the Duluth Playhouse as Carla in Nine! The Musical, she was lauded by the Duluth News Tribune for bringing operatic flourishes to her performance as the seductive mistress. "Laura Velvet is the perfect fit for me at this stage in my career," says Lisa. "I love watching audiences react to this timeless music presented in an engaging show."

Lisa's vocal partners, the Velvettes, are played by Maija Elizabeth Tatro as Audrey Bordeaux and Cally Nielsen as Annie Blackbird. Born in Cloquet, Minnesota, Maija has a bachelor's degree in music from the University of Minnesota Duluth where she performed with vocal jazz group, Lake Effect, for four years. She's sung in music festivals in Ireland, the Manhattan Concert Productions Jazz Festival at the Apollo Theater in New York City and starred in four vocal jazz cabaret shows, serving as music director for one. "My family says I've been a performer since I first learned to talk," Maija confesses. "Audrey Bordeaux is different than any other character I've done, so I'm exploring new dimensions as an artist. I'm so fortunate to work with such amazing talent."

Cally Nielsen, a passionate singer, hails from the suburbs of Minneapolis. Growing up in a musical family, she started singing at a very young age alongside her father, a singer/songwriter. He instilled a love for music and creating music as an art form. Cally honed her technical skills in the University of Minnesota Duluth's prestigious Vocal Jazz program. "Music is my outlet for creative expression," Cally shares. "It's a way to connect with people through their heartstrings."

Duluth, Minnesota native Andrew Perfetti stars as Guitar-Slinger Lance Hammer. Over his 20+ years in music, Andrew has been a go-to player for acts across genres from metal to blues and jazz to reggae. His vision was the catalyst for forming Laura Velvet and the Bookhouse Boys. Much of what you see on stage today came straight from Andrew's imagination. “This is such a great experience," he says. "I get to combine my love for music with my love of theatre and see my talented partners bring it all to life.”

John Heino plays the part of Jack Sloan, itinerant piano player and part-time private eye. John has traveled the country in show bands and other acts that ranged from rock and reggae to blues and jazz. "I've been doing this a long time and rehearsals have never been so much fun," John says. "Laura and the Velvettes have such passion for this music. Their energy is positively contagious."

Tal Linblad stars as Sebastian Half, heartthrob and vintage bass man. From his youth in Salem, Oregon, playing cello, Tal has played just about everything with strings, including guitar and the last 12 years on bass. He's done blues, rock, funk, reggae and says Laura Velvet is all about "great musicians working hard to bring extraordinary entertainment to audiences looking for something more than a band."

Drummer Luke Perry plays Rex Dexter, shady musician and all-around ladies man. A Minnesota native, Luke has been a regular performing drummer for more than 30 years, laying down beats for nearly every genre of music. He's toured with national acts such as Becky Barksdale and shared the stage with a host of legendary performers. “I'm not endorsed by Mountain Dew, but I should be,” he claims.

Randy Lee, the newest Bookhouse Boy, plays a pivotal role as Reed Wilder, the sax wizard who sweetens Laura Velvet's iconic 1960's sound. Randy's been teaching and sharing music with his band and jazz students for decades. An acclaimed professional musician, big band leader and music educator, Randy has a resume spanning Dixieland, Latin, jazz and a wide range of contemporary genres. He and his bands have accompanied such national artists as the Four Tops, the Temptations, the Drifters, Bobby Vinton, Wayne Newton and the Mills Brothers.

Whether you're booking a special event or just want your entertainment to be special, Laura Velvet and the Bookhouse Boys are ready to make you a hero. This complete show with soaring vocals, energetic music and dazzling costumes is guaranteed to please!

“You Don't Own Me“- Leslie Gore

“Baby I Love You” - Aretha Franklin

“Be My Baby” - The Ronettes

“Down in Mexico” - The Coasters

“These Boots Are Made for Walking” - Nancy Sinatra

“Nowhere to Run” - Martha & the Vandellas

“Stop in the Name of Love” - The Supremes

“Fade Into You” - Mazzy Star

“I Just Want to Make Love to You” - Cold Blood 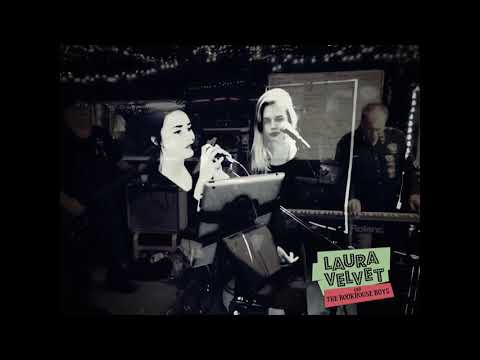